When you grow up in Bayou La Batre, there are certain things long gone that you hear about from the older residents.

The railroad. The fine hotels destroyed by the 1906 and 1916 storms, never to return. The old bridge. (Twist: I remember that one, and the old Dauphin Island bridge too!)

When we would drive around the shore on Shell Belt Road, my Pawpaw would point out a location where the “Old Factory” used to be. There was not even a trace of anything that looked like a building remaining.

This map, dated 1918, shows a “Canning Factory” at the end of a railroad spur, located conveniently near to the “Oyster Beds”. I don’t remember anyone specifically saying that oysters were what was processed at the factory, but it would certainly make a lot of sense if it was.

The railroad here was the “Bay Shore” branch of the Mobile & Ohio Railroad, which operated from approximately 1899 to 1940. There is little to show of this line today, the rails having been physically removed soon after abandonment. It is memorialized by Railroad Street in the Bayou and Bay Shore Avenue in Mobile.

This (1926) map highlights the route from Mobile to Bayou La Batre:

The 1918 map disagrees about the factory being on Coffee Island, and I’m inclined to side with the map. An island location would have required the railroad to build a mile-long trestle over the bay. This does not fit with any description of this railroad that I’ve ever heard of before, and would have been a literal “bridge to nowhere”.

It seems more reasonable that the factory was located on the mainland.

At the approximate location of where the “Old Factory” was said to be, there is still a dirt “road” off from Shell Belt Rd through the salt marsh, leading towards the shore of Portersville Bay. It goes to a point that naturally sticks out into the bay. It can clearly be seen on modern satellite images:

This is what it looks like in Google Street View (and in real life too!):

It is most consistent with the old map if this “road” is actually the railroad right-of-way. Here is the satellite image with the guessed route of the railroad tracks highlighted in yellow:

The real revelation happened when I began searching for more info on the “Alabama Canning Company”.

It turns out there are a lot of pictures of this place, located in the National Archives and the Library of Congress!

This photo shows oysters being unloaded onto the dock. It looks like they had a large pier running out into the bay, with railroad tracks utilized for wheeled oyster baskets. The factory in the background looks like a sizeable operation. It must have been the biggest industry in town at the time.

Here we see the whole thing as it looked from out on a boat in the bay:

Many of the photos show very young workers in the factory and on the boats. This was the early 20th century, the era of child labor.

The work was seasonal, with many families coming to town only during the cooler months when oysters were in season. You can see in the photos almost everyone is dressed for cooler weather. Many of the workers were also immigrants, as the captions mention some children being unable to speak English. From the Mississippi Gulf Coast Museum of Museum of Historical Photography website:

The [labor shortage] problem was resolved initially by bringing in Eastern European immigrants known as ‘Bohemians’ from the Baltimore, Maryland canneries.  The Baltimore people traveled in special railroad cars from their homes in Baltimore to work the canneries during the winter oyster season along the coast.   They lived in factory-owned camps near the canneries, and the children rarely attended local schools. Some of the Baltimore families stayed on after the oyster season.

We can assume the hiring practices established in Biloxi were also followed in Bayou La Batre.

It turns out the reason all of these 100-year old pictures from Bayou La Batre are part of the national historical record, is because they were part of a famous series taken by Lewis Wickes Hine. Lewis Hine is an unsung hero of American labor relations, risking his own safety to end the practice of child labor in this country.

In 1908 Hine became the photographer for the National Child Labor Committee (NCLC), leaving his teaching position. Over the next decade, Hine documented child labor, with focus on the use of child labor in the Carolina Piedmont,[3] to aid the NCLC’s lobbying efforts to end the practice.[4] In 1913, he documented child laborers among cotton mill workers with a series of Francis Galton‘s composite portraits.

Hine’s work for the NCLC was often dangerous. As a photographer, he was frequently threatened with violence or even death by factory police and foremen. At the time, the immorality of child labor was meant to be hidden from the public. Photography was not only prohibited but also posed a serious threat to the industry. To gain entry to the mills, mines and factories, Hine was forced to assume many guises. At times he was a fire inspector, postcard vendor, bible salesman, or even an industrial photographer making a record of factory machinery.[5]

So here we have a connection to historical events of national importance, right there in Bayou La Batre, and all that’s left of it is a dirt path through the marsh grass and scattered recollections of an “Old Factory”.

Hine is also the photographer of a very well known series on the construction of the Empire State Building.

So when was this factory built, and whatever happened to it? The Bay Shore website says:

Below is a photograph taken before the hurricane of 1906, showing the company tracks on the west side of the building. The photographer is facing south, toward Portersville Bay. 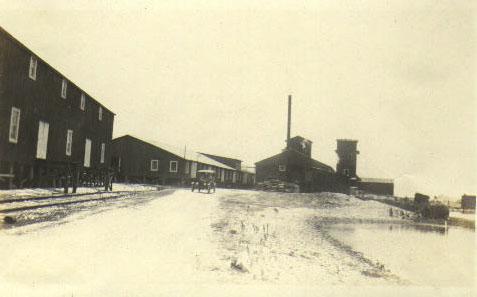 The buildings seen in this image were either heavily damaged, or destroyed, in the 1906 hurricane, and the company either elected not to rebuild, or was financially unable to. At a later date (unknown) this location became the Dunbar & Ducate Factory. Dunbar & Ducate was later destroyed by a boiler explosion which claimed the lives of several employees.

The Biloxi Historical Society lists a number factories owned by several firms involving the DuKate family, including “Dunbars, Lopez, & Dukate Company“, in Alabama, Mississippi, and Louisiana. It appears that it was often called the “Alabama Canning Company” even when it was owned by DuKate.

GEORGE BRYANT told me about the factories
in Bayou la Batre.

Pure Food Laws have cleaned them up, and
now, everything is peaceful and quiet in the fac-
tories. Government inspectors stand on constant vi-
gil making the pickers maintain purity and quality
in the products.

After 1906, the factories lined the Bayou.
There was the Union factory, operated by the
Union. There was the finest and largest, the one
run by Daughdrille. On the coast, was the “Big
Factory,” controlled by Dun, Barr and Ducate. And
there was the “Green Factory,” so called because of
the color used on the outside of the building. All
along the Bayou were the picking sheds, which sent
their products to the larger establishments to be
packed, or, canned.

An article in the New Orleans Times-Democrat, April 7 1910, mentions a factory being constructed by this company in Bayou La Batre:

The factory is described as packing shrimp. It is not clear if this was the same facility as the oyster plant shown in the photos, or a different plant also located in Bayou La Batre.

I cannot find any information about the existence of the Alabama Canning Company earlier than this. It is possible it operated under a different name before DuKate took it over, if it actually existed before 1910.

The plant survived and was repaired after the 1916 storm:

I can only find one other page about an explosion, the Find-A-Grave page for Robert Walter Cox who died on August 16, 1923 when an ammonia tank exploded in the ice plant of the cannery. It reads like a newspaper article, but there’s no citation and I cannot find the same story anywhere else.

EXPLOSION KILLS ONE AND INJURES TWO AT ICE PLANT

Death injury and heavy property damage resulted form a violent explosion at the ice pant of the Alabama Canning Company at Bayou la Batre Thursday night. Robert Cox, 40 years old, frieman at the plant was almost instantly killed and two other persons, Willie and Aime Castello, father and son, recieved serious injuries. The disaster occurred when an ammonia generator exploded, wrecking the one-story structure. The loud noise which accompanied the explosion attracted the attention of people throughout the community, many of whom hurried to the scene.

Cox was discovered in a dying condition outside the boiler room a few minutes after the generator exploded. The younger Castello was huried to the roof of the building from which he was rescued by persons who rushed to the plant. Willie Castello, the father, is an engineer at the plant according to information received in Mobile. His son is tankman at the ice plant.

Shortly after the accident a Mobile physicain was summoned to treat the injured. The small casualty list was apprently attributable to the fact that only a few employees were on duty whe the explosion occurred.

Perhaps this explosion was too much for the Big Factory to come back from, and put them out of business. Perhaps the Pure Food and Child Labor laws had made the business unprofitable. Or maybe decreasing supply due to overfishing. Or a combination of all these things.

By the time of this 1943 map, the railroad is abandoned, the spur track for the factory is already just a dirt road, and the there is no indication building where the factory would have been.

It is also gone on this aerial photograph from the 1940s, where things do not look terribly different from today: